Email ThisBlogThis!Share to TwitterShare to FacebookShare to Pinterest
Labels: video

Update: Back to Work

As of Friday, March 2, my medical leave of absence will be finished and I will be back to work! On Tuesday of last week, my doctor cleared me to return to work without restrictions. I did my return-to-work drug test and physical on Thursday and, after waiting almost a week, received word today that I have been cleared to "mark up" (railroad terminology--I work for Amtrak). It has been six months--virtually to the day--since the injury occurred.

I hope to return to doing SOTA activations soon, as well. I plan to start with some easy summits, such as a few drive-ups, first.
Posted by Steve at 11:28 PM 19 comments:

Email ThisBlogThis!Share to TwitterShare to FacebookShare to Pinterest
Labels: accident

This is my next project.

The LDG Z-11 ProII antenna tuner is designed for portable operation. Up to this point, I have been powering it from the same Bioenno 12-volt battery that I power the radio with, by way of an MFJ-1104 Mini 4-Way Fused DC Powerpole Distribution Center. Installation of the battery pack will eliminate the need for the distribution center, thus simplifying setup and lightening the load in my backpack (it doesn't weigh much, but every little bit helps).

I finally inspected the radio (Yaesu FT-857D) and other equipment that were in my backpack when I fell and broke my arm. I set everything up--including the Yaesu ATAS-25 vertical antenna--inside my house; it all seems to be working fine. Because I was indoors, my signal did not get out very well. I did have fun listening to all the hams taking part in a sweepstakes on 40 and 20 meters, though. I have been out of touch with happenings in the amateur radio world for the last few months, so I do not even know which contest it was.
Posted by Steve at 4:49 PM No comments:

Update: a Progress Report on My Recovery

On October 31, I had a followup appointment with my orthopedic surgeon. Overall, things are looking positive; the metal plate and screws are all still in place and have not come loose, and the doctor says she sees signs of possible healing of the fractures in the bone. I no longer have to wear the very bulky sling that I had been wearing--virtually 24 hours a day--for the six weeks after the surgery. Sleeping is much easier now, although I still cannot lie on my left side and there is still some general discomfort. I have also been cleared to drive again, which makes life easier for my wife and mother, who no longer need to take time off to drive me to my twice-weekly physical therapy appointments.

Speaking of my physical therapy, it is progressing with signs of progress. I still have far from full movement, but I seem to be move the arm a little farther each week. After the trauma of the injury and going through surgery, the muscles knotted up and are reluctant to relax (for lack of a better term).

Now that I am getting more confident in my ability to do little things, perhaps I will soon open the backpack I was wearing when I fell and inspect my radio equipment--I have not been able to bring myself to do that yet. The Efactor antenna--which I was carrying in my right hand at the time of accident--took some of the brunt of the fall and is bent out of shape; I think that I might be able to repair it, though.
Posted by Steve at 9:35 PM No comments:

On Thursday, August 31, I set out with the intention of activating Point Reyes Hill (W6/CC-071), which is located in the Point Reyes National Seashore. The normal way to access this summit is to drive up to the top of Mt. Vision Road, then walk in about one-half mile to the activation zone. However, when I turned onto Mt. Vision Road from the highway the road was closed and gated due to extreme fire danger (there was a "Red Flag" warning that day). Luckily, I had the option of an easy "Plan B": a SOTA summit known simply as "Point Reyes" (W6/NC-542) is located at the extreme end of the peninsula near the lighthouse, which is popular for public tours.

It was simply a matter of parking in the lighthouse parking lot and climbing a quarter of a mile or so to the top of the rock. Although it was hot and tinder-dry just a few miles inland, the point itself was cold, windy, and, at times, foggy.

The activation itself went off without a hitch, although it took approximately three hours to log the four contacts required to qualify (I ended up logging five contacts). My new Efactor antenna worked fine, although I was only able to log one contact: Joe, AA0BV, who just happened to be on Mt. Tamalpais, the site of my previous activation. I eventually logged four additional contacts on 20- and 40-meters SSB and called it a day. This is the point where my real adventure (or, rather, misadventure) began.

I successfully navigated through the scrubby brush, "bushwacking" my way down to the trail back to the parking lot. Within a few hundred yards of end of the trail, I stumbled on something and fell. I landed on my left shoulder; I suspect the weight of my backpack with the radio equipment contributed to the force of the fall, as I went down hard. (Luckily, I was nowhere near the edge of the cliffs that can be seen in the photos below.)

My first thought upon hitting the ground was "I hope no one saw that!" That quickly changed, however, when I realized that I no longer had the use of my left arm. I suspect that I had dislocated it at the shoulder--at least I hoped that that was the worst thing that happened. I rolled onto my back--I was still wearing the pack with radios--and laid there like an upside-down turtle, assessed myself, and weighed my options. I was able to move my wrist and wiggle my fingers, which was a good thing. There was no way I was going to be able to get up and move by myself, though. I reached for my cell phone with my right arm and...there was no signal. I started to get a little scared at that point.

Luckily I was in an area with many nearby tourists; I swallowed my pride and started calling "Help!" After a few minutes, a couple of people heard my call and came to my aid. For some reason, they wanted to sit me up then help me walk to my car; I was having none of that, as any attempt to do so caused excruciating pain and discomfort. I told them I needed an ambulance. More people began to show up and someone volunteered to go call 9-1-1.

I estimate that it took at least 30 more minutes before someone reached a location where they had a strong enough signal to make the phone call. After that, it took 20-30 minutes for the Marin County Fire Department engine company and ambulance to respond from the nearest town (Point Reyes Station). In the meantime, a park ranger arrived and stayed with me.

When the paramedics and additional rangers finally arrived, they secured my arm, loaded me on a stretcher, and carried me to the ambulance. What followed after that was a long two-hour, winding, bumpy ride to Marin General Hospital in Greenbrae. Fortunately, the paramedic was able to give me morphine so that it would not be too painful.

At the hospital, x-rays showed that I had suffered an impact fracture of my humerus (upper arm bone) just below the ball joint in the shoulder; there were actually a number of small fractures, and the shaft of the bone was displaced. It was a pretty bad break.

To make a long story short, I continue my recovery as I write. On September 11, I underwent surgery, in which a metal plate and eleven screws were necessary to put the bone back together (as I said, it was a bad break). In the time since the operation, I have been doing physical therapy to regain full (-ish) use of the arm. The physical therapist says I am making good progress, although it seems slow to me (I have to keep reminding myself how lucky I am that it was not worse, as bad as it was). I have been wearing a bulky sling since I was injured and expect to until the end of October, at least.

I hope to be able to return to work sometime in mid-December. I work for Amtrak as a passenger train conductor, so it's imperative that I get as close to full-function of my arm as possible before I do return. I am fortunate to have access to short term disability payment plans from both the Railroad Retirement Board and my union, so I should not run out of money in the interim.

It has taken so long for me to post this story because I only recently have been able to start using both hands to type. 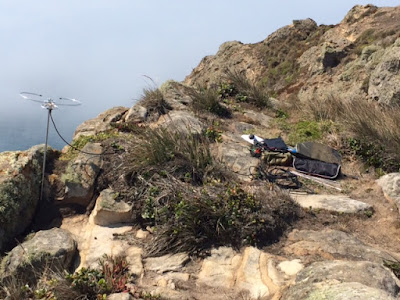 Portable station W6SAE, set up for SSB operation on 2 meters. 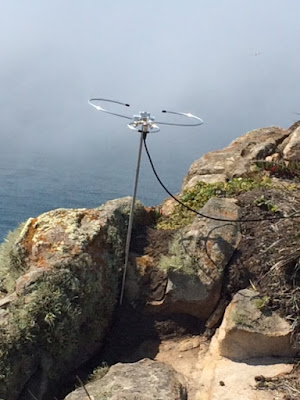 Here is a closeup of the Efactor Dual-Band 144/432 MHz antenna in action. 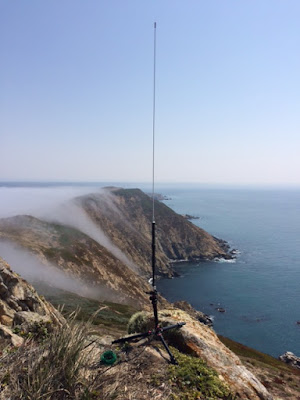 This is my Yaesu ATAS-25 antenna, for HF SSB, and VHF FM. 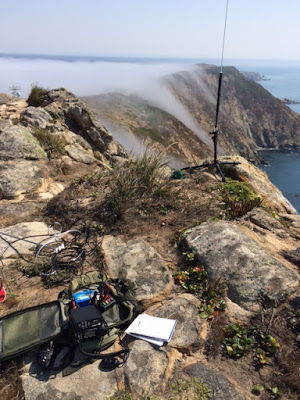 Another view of the operating position.

I activated Mount Tamalpais (W6/CC-063) on July 29. It was my second activation of this 2,500-foot summit since I became involved in Summits On The Air (SOTA). One of the purposes of this activation was to try out my new Efactor Dual-Band 144/432 MHz Antenna on single sideband (SSB). Unfortunately, I left the main part of the antenna at home and did not realize it until I had arrived at the mountain. Luckily, though, I did have my Yaesu ATAS-25 vertical antenna and was therefore able to activate the summit. I logged four contacts on 2-meter FM (146.520 MHz) and six on 20- and 40-meter SSB. However, I did not accomplish my main goal--testing the Efactor antenna; I was determined to rectify that situation with my next activation.

The biggest accomplishment of this activation was that I logged three summit-to-summit contacts, the most distant being in Washington state.